This book is comprised of scans of original works by Stephen Foster. It's a warts and all reproduction of sheet music and elements of another book that's over a century old, so there are some minor printing imperfections owing to the age and quality of the original manuscripts.

Contained within are 5 instrumental works, 15 Hymns, and 136 songs. In total 156 compositions which highlight the brilliance of Foster.

There is an introduction that is a brief overview of the life and times of Stephen Foster. And there are a couple of special sections at the end. Appendix I is a musical tribute called 'Lullaby' by Percy Grainger to Stephen Foster's song 'Camptown Races.' Percy Grainger was an accomplished composer in his own right, best known for 'Country Gardens'.

Appendix II is a delightful collection of the beautifully decorative covers from the original sheet music of some of the songs in this book. Because this book is comprised of the original lyrics of the songs written well over a century ago, it should be viewed in terms of historical significance, not political correctness. While some of the words and sentiments are now out of date and politically incorrect, the melodies remain beautiful and timeless. Slang terms and insulting stereotypical themes which were once mainstream and common, are now offensive and totally unacceptable. Despite these lyrical shortfalls when viewed in today's light, the underlying simple melodies remain timeless classics. The catchy tunes are hard to get out of your head, and will live on forever, just as they have already lived on 150 years since Foster departed, so please enjoy. 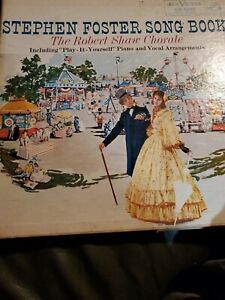