Pantheon Platform 9,396 followers on LinkedIn. Website Operations Platform for Drupal & WordPress At Pantheon, we're building the world's best WebOps (Website Operations) platform - one that. Let’s begin by saying we’ve known our friends at Pantheon for a long time—after all, we both have deep roots in the Drupal community (their founders ran development shops while Platform.sh was incubated by Commerce Guys, the software vendor behind Drupal Commerce). They’ve built a great team and hosting product for Drupal. Pantheon is a cloud platform for Drupal that allows developers to try and develop Panopoly using an easy one click installer! Pantheon also is able to provide automatic updates for Panopoly (or any supported Drupal distribution) which allows one click updates to all of the Panopoly apps and all of the required contributed modules/libraries! To get started, you will need to. Pantheon Upstream for Drupal 7 Sites. Contribute to pantheon-systems/drops-7 development by creating an account on GitHub.

Pantheon is a cloud platform for Drupal that allows developers to try and develop Panopoly using an easy one click installer! Pantheon also is able to provide automatic updates for Panopoly (or any supported Drupal distribution) which allows one click updates to all of the Panopoly apps and all of the required contributed modules/libraries!

Pantheon is a webops platform[3] for open-sourceDrupal and WordPress websites. It is an app-specific PaaS provider, sold on a monthly subscription basis, with several support tiers available.

Technologically, Pantheon applications run as software-as-a-service instead of running on users' own servers. Pantheon's service is built on top of Google Cloud Platform.[4][5] 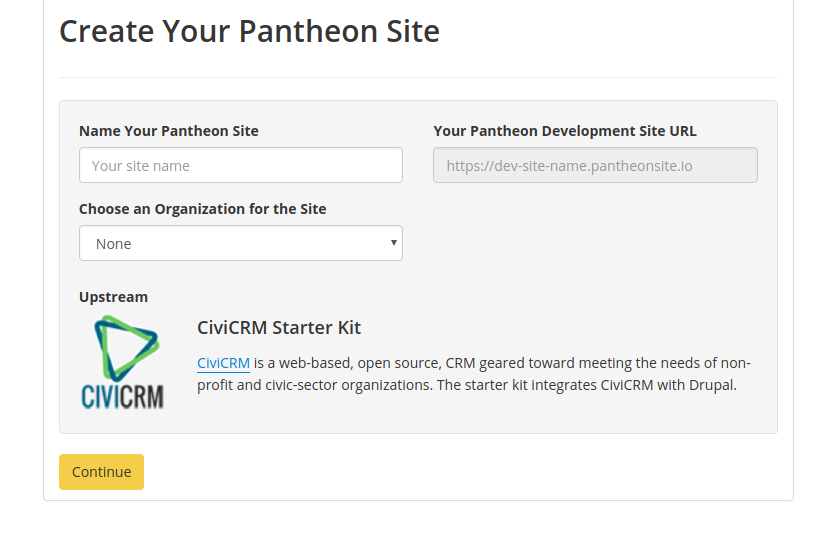 Founded in 2010, Pantheon Systems, Inc. raised a $1.3 million seed round to start.[7] They subsequently raised $5 million Series A financing from Foundry Group, with previous investors being Baseline Ventures, First Round Capital, Floodgate, and Founders Collective bringing the total amount to $6.3 million.[8]

In 2014, Pantheon raised $21.5 million in Series B financing led by Scale Venture Partners (ScaleVP) with participation from OpenView Partners and existing investors Foundry Group and First Round Capital. As part of the funding round, Rory O'Driscoll, Partner at ScaleVP joined the board of directors.[9]

In 2016, Pantheon announced that it has raised a $29 million Series C round. Investors in this round include previous investors Foundry Group, OpenView Investment Partners, and Scale Venture Partners, as well as new investor Industry Ventures, which put $8.5 million into this round. The new round follows Pantheon’s $21.5 million Series B round in 2014 and brings the company’s total funding to $57 million.[10]

Pantheon is a combination of web development tools in the cloud and web hosting and management services. It is based in the cloud, and the service is free for developers.[7][12]Developers have a choice between Drupal 7, Drupal 8, WordPress and installation of profiles like Open Atrium. Data can be imported onto Pantheon automatically if the business has an existing Drupal-based website.[13] Pantheon Multidev does for a company's website what software-defined data centers do for its infrastructure. Each member of a team can use all the services that power a site on demand, developing on a single platform. As a result, large websites launch faster and cost less to manage over time.[14][15]

Based on Pantheon's multi-tenant containerized architecture, Multidev spins up in minutes, with no need for additional infrastructure or virtual servers.[16]

Pantheon makes it easy to deploy different versions of a site on test servers and the live site, as well as backup servers.[7][17]

There’s no shortage of choices when it comes to managed hosting platforms (MHP), and some niches are more cutthroat than others. WP Engine, for instance, offers a WordPress-backed solution tailor-made for bloggers and enterprises, while Flywheel and MediaTemple target designers. One of the fastest-growing categories in the $70 billion industry, though, is marketing, and San Francisco-based Pantheon appears to have it on lock.

Pantheon, which was founded in 2010 as a Drupal extension and which later expanded to WordPress, is one of the largest MHPs of its kind, with over 10,000 customers (including Google Cloud, SendGrid, Apigee, Tableau, Yale, Coach, the United Nations, Quicken Loans, MIT, Harvard Medicine, and IBM) and more than 50,000 developer sign-ups each year. To lay the foundation for future growth, it’s raised $40 million in series D growth financing led by Sageview Capital, it today announced, with participation from existing investors Foundry Group, Scale Venture Partners, and Industry Ventures.

This comes after $29 million and $21.5 million series C and series B funding rounds, respectively, and brings Pantheon’s total capital raised to over $100 million.

CEO Zack Rosen said the cash infusion will be used to expand Pantheon’s sales, marketing, and product teams, all toward the lofty goal of one day powering 30 percent of the world’s websites. It’s progressing slowly but surely toward that: Pantheon claims its container-based cloud platform currently runs more than 285,000 Drupal and WordPress websites (up from 150,000 sites three years ago) and serves over 10 billion page views a month.

Above: Elastic hosting with Pantheon.

“Our customers have demonstrated that the ability to iterate faster leads to achieving their business results faster. To help them iterate faster, we’re laser-focused on managing uptime, security, scaling, performance, and on automating development workflows that often prevent web teams from focusing on innovation and creating value,” said Rosen. “Agile marketing has quickly become fundamental to many of the world’s largest companies and Pantheon is proud to be at the center of this historic shift … This investment will help us continue to expand our customer base and set the new market standard for WebOps.”

Pantheon builds Drupal and WordPress sites undergirded by a “lighting-fast” content delivery network (CDN) that’s powered by Fastly, an edge cloud platform that caches pages from more than 40 locations and 60 points of presence across the globe including Dubai, London, Sydney, Johannesburg, Boston, Seattle, and Buenos Aires. According to Pantheon, most customers achieve “sub-second” page load times and 99.9 percent uptime thanks in part to it, and to a proprietary network-backed file system — Valhalla — and routing technology that dynamically scales across server clusters.

Pantheon has a nifty migration toolkit that makes it easier for developers to move existing websites to its platform, along with dedicated development and staging environments that mirror production sites’ configurations. Populating those environments is a robust set of dev tools, among them an integrated Terminus command line, a local Docker-based environment, full-text search powered by Apache Solr, and automated Git-based workflow with feature branching.

Set-it-and-forget-it is the name of Pantheon’s game, and toward that end, customers get automated updates and backups and site-monitoring tech that runs over a million checks a day for potential performance issues, plus fully managed HTTPS certificates and protection against distributed denial-of-service attacks. For enterprise clients, Pantheon offers an extensible, SLA-backed product with a unified dashboard for role-based site portfolio management and support for security assertion markup language (SAML), and Upstreams, a workflow that packages custom code, themes, and open source components into a desired starter that can be used to quickly spin up a new site.

“Pantheon is quickly becoming the go-to WebOps platform for forward-thinking web development teams and agile marketers who are seeking to deliver the world’s best web experiences on Drupal and WordPress,” said Sageview Capital cofounder and managing partner Ned Gilhuly. “Sageview provides growth capital to leading companies with a demonstrated track record of success and compelling market opportunity. Pantheon is a very exciting addition to the Sageview portfolio, and we look forward to providing Zack and his team with financial and operational support to enhance the company’s market-leading position and impressive growth trajectory.”

Pantheon offers three types of hosting subscriptions: Basic, which starts at $50 per month for five domains; Performance, which ranges from $175 to $1,000 per month for 10 to 70 domains; and Elite. It also offers preferred pricing for agency partners, which shaves 30 percent off the cost of all tiers.

VentureBeat's mission is to be a digital town square for technical decision-makers to gain knowledge about transformative technology and transact.Our site delivers essential information on data technologies and strategies to guide you as you lead your organizations. We invite you to become a member of our community, to access: