With the librettist Lorenzo da Ponte, the pair produced the opera Marriage of Figaro in only six weeks. The Overture was completed only two days before the opening on May 1, 1786. The music opens with bustling notes, like whispers of gossip which gain momentum. Ultimately, these fragments gel into an energetic theme which romps happily throughout the Overture.

The overture is very lively and its persistent driven tempo throughout makes this an incredibly thrilling piece of music that has been one of the most played orchestral works since its premiere in 1786. Typically an overture showcases some famous themes/melodies from the opera itself, however this work is an exception as Mozart does not let us preview any of the thematic material from the opera. Instead, he writes an overture that captures the pace and the atmosphere of the opera. The opera is in the category of ‘opera buffa’ which translated means ‘comic opera’ and thus a fast-paced, enthusiastic atmosphere is created with this overture.

The overture starts with a fast and precise quaver pattern, that is so quiet you may not even be aware that the overture has started! In a comical style, Mozart leads this motif into a loud rumpus which involves the whole ensemble. This is perhaps the most famous theme as it is the basis for the overture. This burst of colourful energy sets the pace and frivolity of the work, which is what makes such an exciting piece to listen to. The piece is in the bright key of D major, and this aides with the luminous effect and atmosphere that Mozart was aiming to create.

This exciting overture is full of both comical and romantic themes that are passed around different areas of the orchestra. For instance, the opening theme is headed by the bassoon, whereas later on the oboes also join in with this theme in a tutti section. The work is light, bouncy and conveys a wonderful celebration of music, comedy and emotion. The are some really interesting interludes from the bassoon and upper strings throughout the work, however, there is a wonderfully romantic oboe solo halfway through the piece, which is such a joyous turn of emotion within the music.

The overture is perhaps one of the most played in concert repertoire, but it is also one of the most technically demanding due to the sheer speed it should be played at to create the playful and comedic effect. There is a lot of fast passage work in the upper strings, which makes the overture even more gripping. I find this work is a marvellous celebration of music and its surprising twists and turns make it all the more striking and memorable. 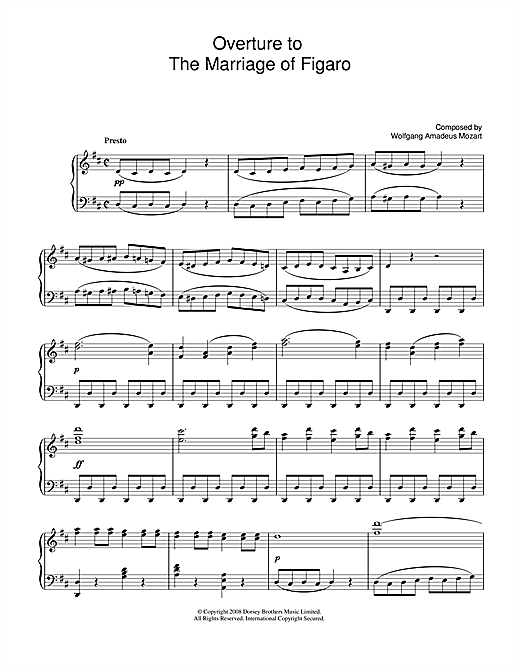 A few parts of Mozart’s Opera “The Marriage of Figaro”, which is one of Mozart’s 3 great operas (along with “The Magic Flute” and “Don Giovanni”), as well as being one of the greatest operas overall, and is among the most performed today:

Historical and political context: “The Marriage of Figaro”, in short, is about commoners exposing the plotting and scheming of a local aristocrat, and embarrassing him into straightening himself out, scoring a victory for the little guy. A stage comedy of the same story, written just 2 years earlier, was banned from performance for several years by Viennese aristocracy because it was considered to be “dangerous” – it had an overtly anti-nobility message. While it’s not unfamiliar to us today for music and arts to have a political stance, the weight of music at this time was greater – with no internet, no TV, no mass media, music, whether in the concert hall or opera house, was a primary way of gathering a lot of people and making an artistic and political statement, and people understood it. And it seems, they understood messages in the arts more clearly and directly that people do today. So Mozart was kind of taking a stand as well, and expressing it publicly.

Also, of very significant note, the premiere of this opera occurred in 1786, which was just three years before the French revolution of 1789, which was one of the bloodiest and most tumultuous revolutions in history. It was one in which 97% of the population (the commoners) overthrew the upper 3% (nobility). So we see the poignancy and relevance of such a story.

The first link begins with the opera’s overture, which is a short-ish orchestral opening piece to the rest of the opera. It sets the tone for what’s to come – a serious opera will have a more dramatic overture, or in this case, “The Marriage of Figaro” is categorized as a comic opera, and so we have a very light-hearted overture.

What to listen for: To put it in very un-scholarly terms, Mozart’s music is often just bubbling and bursting with personality. This is a light-hearted piece that really embodies joy, from start to end. This is one piece I would definitely take with me if I were going to be stranded on a desert island. But to get more specific – again, in Mozart, we see his graceful, lyrical, clean and clear writing; all constructed and executed to a crisp perfection. This overture certainly has more volume, dynamic contrast, and punch than the piano concerto, yet it never for a moment feels heavy or excessive. On the aspect of form, one thing to listen for is the classical ideal of “symmetry” expressed in this overture – most musical ideas in this piece occur twice. Sometimes the second time exactly the same as the first, but many times not – we see how Mozart takes an motif and varies it, develops it, adds something, or changes instruments or harmonies. Always balanced and logical, yet always creative and forward-thinking as well.

Not much to say about the scene following the overture, but it’s just a pleasant piece of music. It’s a duet between Figaro and his bride-to-be Susanna, as they’re checking out their new home. Figaro starts out measuring stuff and counting in Italian – “Cinque, dieci, venti, trenta…” while Susanna is sitting and enjoying a veil she made for the wedding. A funny thing that happens at 5:25 is that Susanna is trying to get Figaro’s attention about veil, but Figaro (in proper classical form) does his counting thing a second time, juxtaposed over Susanna’s comments about her veil, and he’s so fixated in what he’s doing. At 5:56 he finally responds to Susanna, but has his head buried in a notebook. Couples’ humor from 200 years ago! It’s Mozart, but it’s also the production and choreography to decide exactly how each scene is interpreted.

The other link, which is not from the same production, is an aria (song within an opera) by another character Cherubino, who is a early-teenage boy (but the role written for an adult mezzo-soprano) who is just discovering all these weird feelings he’s having, as he’s hitting that age. This is my favorite performance of this aria that I’ve heard – some others I’ve heard were sung too slowly, or were too “adult-sounding,” or just sounded “beautiful and elegant” – Pamela Helen Stephen certainly does it beautifully, but she also adds this youthful wildness to it that I think is so appropriate for the character, who is a charged and unstable early-teenage boy, filled with nervous and impulsive energy. Yes, that wonderful age.

So that’s a taste of opera! I think we’ll move onto another composer soon, but…

Next: Wrap-up of Mozart, and further suggested listening