Lohengrin is a Romantic opera in three acts composed and written by Richard Wagner, first performed in 1850. The opera has inspired other works of art. King Ludwig II of Bavaria named his fairy-tale castle 'New Swan Castle', or 'Neuschwanstein', after the Swan Knight. 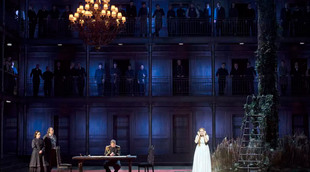 Lohengrin represents the most exciting aspects of Romantic opera:in the tradition of Weber’s operas, leaving plenty of room for long periods of singing, for the moulding of the singing, but gradually deploying the orchestral fabric with an expansion of the woodwinds and the assumption of a space in which Wagner’s unique symphonic colour will develop to form his immediately recognisable sound signature.

The Prélude, with its almost immobile dynamic, its haunting stretching out of the sound, is the initial image of that:the atmosphere of Lohengrin appears immediately, a blend of reverence and contemplation, when the orchestra must be absolutely transparent even as it exudes a mellowness of sound and a sort of warm tenderness.Lohengrinis first and foremost a conductor’s opera.Throughout it the conductor must distribute a thousand impulses, caressing or dramatic, even violent, and finally soothed, while at the same time moulding the huge choruses with the same science of balance and outbursts, of light and dark.And then there are the voices, the vocal quartet that weaves the web of this Romantic and pessimistic story in which the theme of power combines with that of the artist and his function on earth.

A young princess, Elsa, is accused of her brother’s murder.As her only defence, she describes a dream in which a noble knight comes to wash away the vile accusation – and, at that precise moment, a mysterious knight appears in a gondola pulled by a swan!He offers to undergo God’s judgment by fighting for the princess’s honour and then marrying her – on one condition:that she not seek to find out who he is or where he comes from.The knight quickly defeats the accuser, Telramund, spares his life and then marries Elsa amidst great public rejoicing.But the vanquished Telramund, humiliated, plots his vengeance with his wife, Ortrud:the two of them will sow doubt and fear in the mind of the princess regarding the origins of the mysterious knight – until she, troubled and unbalanced, asks the forbidden question.The knight then reveals his divine essence and sense of sacred mission, delivers Elsa’s missing brother, whom Ortrud’s spell had turned into a swan, and goes off forever.

The four voices of this tragic play balance and support one another:Lohengrin, a lyric tenor with a timber that must be clear and radiant, projecting an ardent voice; Elsa, a lyric soprano both pure and intensely moving, tortured and terribly human in her fragility; Ortrud, the demon woman “who knows not love,” according to Wagner, a mezzo-soprano or dramatic soprano with a dark timbre that must combine with an assertive dramatic temperament; and Telramund, the prototype of the Wagnerian baritone, with fierce projection and clashing phrasing.