The golden ratio is a mathematical concept which is used to create unique and symmetrical logos. The golden ratio is not just used in design but in fact, it is present everywhere. Look around, every flower, every fruit, every plant follows the universal golden ratio. The Free Logo Maker. It's frustrating to be limited. That's why Online Logo Maker is simple and complete at the same time. Online Logo Maker comes in two flavors: Free and Premium. Download your logo in 300 px with the Free Pack, or in 2000 px with the Premium pack.

A logo… what is a logo? A logo is the essence of a company or organization. It is a simple but quite meaningful graphical representation of companies services, vision and agenda.

The logo is the single most powerful tool of a company, using it to make a somewhat substantial effect on the customer’s mind. It is the first and last thing that comes in mind when you think of a company.

So it is quite evident that it should be and must be made with immense precision and technique. And what better way to do this except for using the golden ratio!

The Golden Ratio otherwise known as the Divine proportion or Golden Section it is the very essence of life itself. Every creation in nature has come to existence with the Golden Ratio! The simple tree fern to the snail even us human every part of our body follows the golden ratio.

If we try to simplify this overwhelming phenomenon, we can put it mathematical terms were the ratio it’s known as 1:1.1618 ratio.

The Golden Ratio is known to many as the proof of God’s existence, but we are not here to talk about that, so let’s get into the ratio itself and how can it be used in a simple logo.

From the pyramids of Giza to the Pepsi logo the great Golden Ratio has been used by man to turn a design into a masterpiece. The human brain is preprogrammed to get naturally attracted to things made by following the Golden Ratio.

To make things simpler, suppose there is aline, the line should be divided into twoparts A, the longer piece, and B, theshorter section, if the result of A divided by B is equal to the sum of A and B divided by A, it will follow the golden ratio.A bit confusing huh? Read the last line a few more times you’ll get it.

To get to the golden mean first, you have understood the Fibonacci number series. The sequence is straightforward, and it starts from zero, the next number is the sum of the previous two numbers. 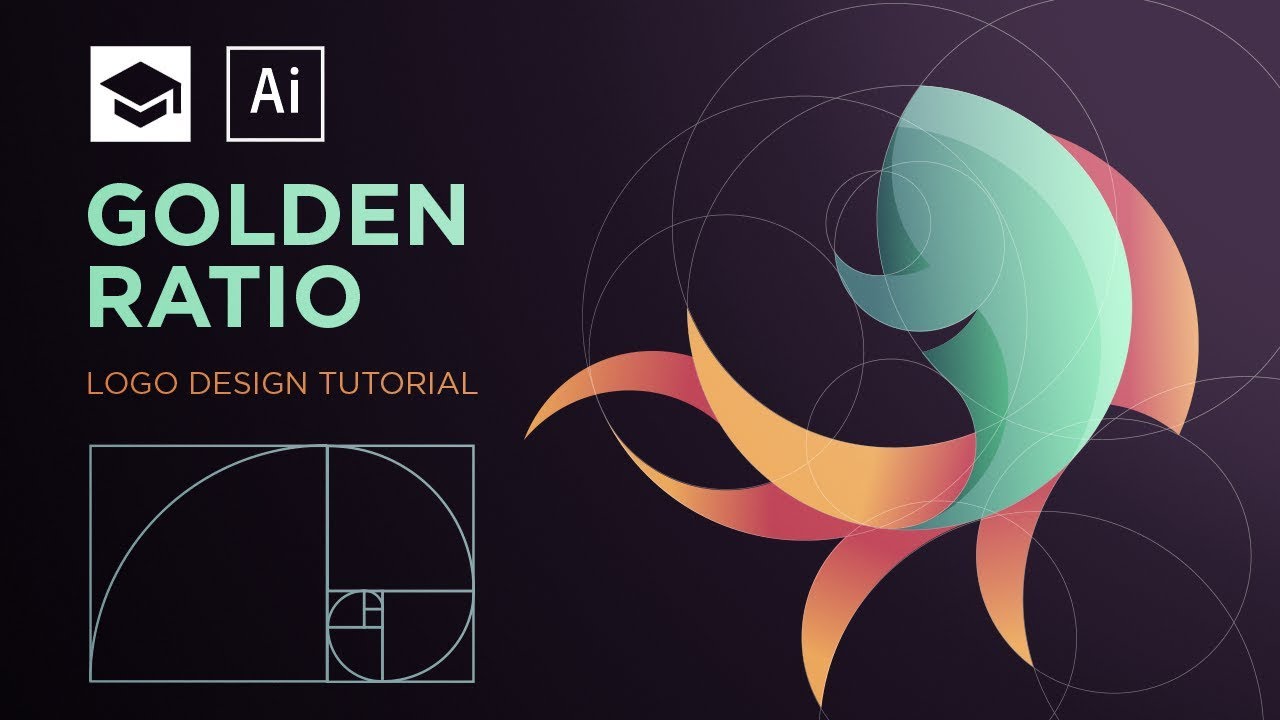 Moving on, let’s get it on paper and seehow it looks, shall we? Okay so follow my instructions take a piece of paper, nowlet’s draw a square with say a length of 1 unit now multiply the length of thesquare with 1.618 and use the result as a length of a rectangle with the sameheight as the square.

Golden ratio logo design is fundamental. For a person who is learning graphic designing, that person should have some basic idea about the golden ratio: logo design. A golden ratio is just a tool that will help you create a design that is near the perfection.

The perfection in design is what we aspire for as graphic designers. We want our creations to look the best.

Now on the diagram A(b) if we drew an arc from the left bottom corner to theright top corner and continue the arch tothe corresponding square and keep going till we covered all the squares, the resulting diagram will give us theGolden spiral

Forget about the spiral, for now, let’s get into circles. If we were to draw a circle in each square formed in diagram 1(b), we would harmoniously perfect circles, and all of them follow the Golden ratio with their corresponding squares.

And each similar circle, likewise the squares, differ from each other by following the Golden ratio, meaning both same circles have a ratio of 1:1.618, isn’t this fun!

Now that you’ve seen how harmonious andbeautiful anything can be, if it were to bedesigned with the golden ratio, let’sget into how to use the Golden ratio when creatinga logo.

These are some ways to use the Golden ratio in logo design:

Setting your dimensions is one of the essential parts of the design and what better way to do it, but using the golden ratio. It is effortless to set a dimension accordingly with the Golden mean.

Suppose the length of the design is 960 pixels, divide 960 by 1.618 you’ll get your height and this layout will be outstandingly eye-pleasing and beautiful than any other dimensions set by other than using the Golden mean.

When we look at a design, there is a placewhere our eyes are naturally drawn towardsyou will be able to work that out using the golden spiral. The point where the spiralcoincides is where the sweet spot ifyou’d say, lies. Try to put the most crucialfeature of the logo on that spot. If you followthis step, it will make the logo stand out.

3. Using the Rule of Thirds

If you don’t want to undertake such hassle with drawing the Golden squares then plotting the spiral and what not. Don’t worry there is an easier way, the Rule of Thirds. It is an effortless technique, not so accurate but will get you damn close to it.

It’s very usual in cameras and mobile phone camera display you can see the gridlines on the screen dividing the image into three columns, both vertically and horizontally, separating the horizontal and vertical lines by using the ratio 1:1.618.

The layout by the ratio, the content placement by the Golden spiral or the Rule of Thirds and the perfect base by the Golden and the , your design will turn out to be an epitome of perfection and creativity.

The Advantages and Disadvantages of a Graphic Designer

The Importance of Graphic Design in Today’s Society

Next PostWhat is the Difference Between Serif and Sans-Serif?
« Drupal 8 Web Development
Dlib»