Note: Commercial use of our machine embroidery designs. Designs listed on this page you can use in your business. You can embroider, and sell embroidered products. Change designs of your own choice. Add or remove various design elements. Use together with inscriptions or other designs.

Limitation. Production of not more than 100 embroidered items. If you want to produce products with our designs in greater quantities - please contact us.

This post has been originally commissioned for SketchBook Blog in 2016. After the site’s migration, the original is no longer available, but you can still access the content here. Enjoy!

As always, let’s take a look at the skeleton of a fox first to see its proportions better. Because foxes are so similar to wolves, correct proportions are the key for a true fox look. You can remember it this way: A fox has long legs of a wolf attached to an elongated body of a cat.

Try to sketch the skeleton a few times to get a good grasp of the proportions.

You don’t need to know every muscle of a fox body, but just the forms they create. Let’s build the body now, step by step, in a simplified way to remember it easier. You don’t need to use exactly the same steps to draw a fox. Instead, learn from my method to create your own, personal way.

First, the elongated, narrow main body. Divide it into fourths to keep the proportions correct.

Add the volume to the forequarters and the hindquarters. They’re not very thick.

Add the “hands” and “feet” with paws. Defining the heels may help you add the calves later. The paws should be quite small, fitting the slender legs.

Add the neck, the tail, the chest details, and the stretchy skin between the limbs and the body. It’s not always necessary to draw them all, but make sure you know that they are here.

This was the anatomical view of a fox body. Depending on the species, age, and season, foxes may have this slender outline of the body covered with fluffy fur. In extreme cases, the fox may look like a fluffy sausage with legs!

Here’s the whole simplified muscles diagram if you want to use it as a reference:

How to Draw a Fox Head

The body is one thing, but the head requires more of our attention. Here the proportions are even more important, so don’t just copy the process I’ll be showing you—analyze the steps and try to find the relations between the elements, something you can remember later. Of course, you don’t need to repeat the steps in exactly this order every time you draw a fox. Once you know what the goal is, you can skip the steps, rearrange them, or do a few of them at the same time.

Start by defining the position of the eyebrow and the direction of the muzzle. Keep perspective in mind!

Define the length of the front of the muzzle. It’s quite short in foxes.

Add the teardrop shape of a muzzle. Keep it narrow.

Put some upside-down “glasses” on the top of the muzzle—this is the eye socket area.

Define the flat front of the muzzle. This is more helpful than it looks!

Draw lines across the nose towards the forehead.

Draw the eyes in the center of the eye sockets.

Outline the nose and the lower eyelid.

This will be the whiskers area, an important part of a fox muzzle—it creates that cunning fox smile!

The lips go quite far, almost to the eye level.

Time for the ears. Foxes have them huge! (some species bigger than others)

Once you have all the guidelines in place, you can draw the details of a fox face. The eyes have a typical canine look, with clear dark outline. Surprisingly, the pupils of foxes are slit, like in cats.

Notice that the fur-dots over the eyes are smaller than in wolves. Usually they’re not distinctively colored.

Foxes have characteristic small noses at the end of their pointed muzzles. They may be slightly protruding up.

Don’t forget about the whiskers and fur! 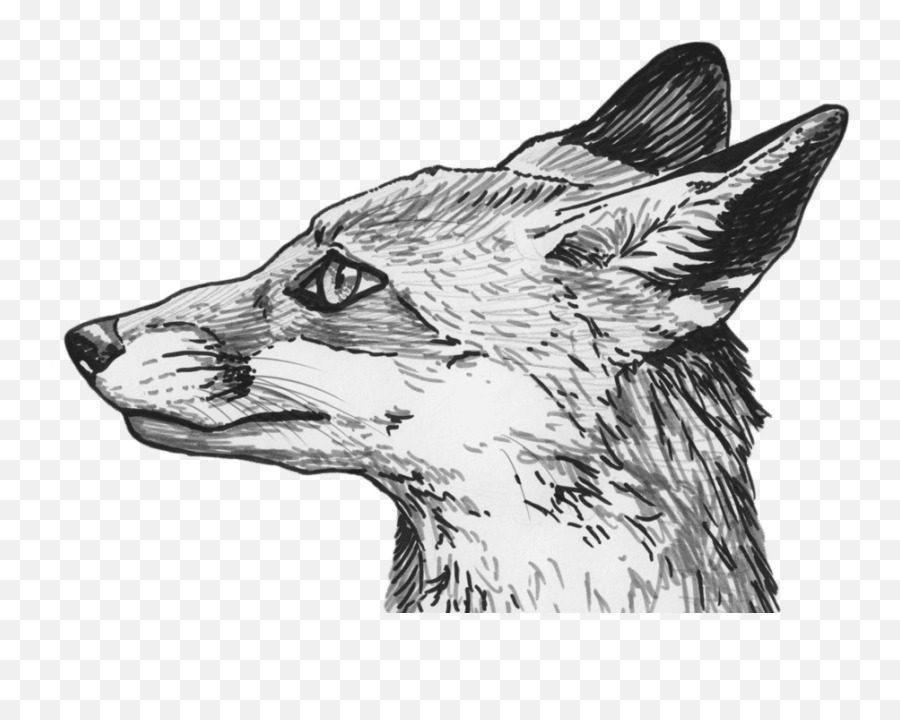 How to Draw Fox Paws

Fox paws look a bit like a cross between wolf and cat paws. They have non-retractable claws (pink or lightly brown), but they’re quite compact and rounded. To start, imagine you’re creating a wire sculpture of a quadrupedal animal and that you want it to stand surely on its wiry legs. Narrow loops bent flat on the ground should do the job.

“Extrude” the flat paws to add volume to them.

Add volume to the wrists/ankles to define the width of the limbs.

Connect the paws with the wrist/ankle. That bridge between them must have a 3D volume as well. Don’t forget abut the dew claw on the inner side of the front paws.

Create a flat hump on top of each paw. This will add detail to each toe.

Finish each toe with a rounded tip and a claw.

Finally, add the final lines over the guidelines. Don’t forget about the wrist pads (not visible in this view).

How to Draw True Foxes Species

There are many species of foxes, so you need to learn some more details if you want to be more realistic in your drawings. I will show you a few things about popular species, but make sure you study them thoroughly from photos to get a more complete picture.

The most popular species, almost synonymous with the name “fox” is the red fox. You can treat it as a default species for a fox, with a typical head and body you can then reshape to create some other species. The muzzle is long, tapered, with the whiskers area quite far from the eye. The eyes are usually orange or light brown in color.

Fennec fox is the chihuahua of foxes. It has a tiny body with a disproportionately big head. The ears are huge, and so are the eyes. The muzzle is short, very pointed, with a tiny nose. The eyes are dark brown, so dark that the pupils are usually not visible. They’re still slit, though!

Most foxes change their coat for winter, but this species takes it to extreme. It’s dark brown in summer, and pure white in winter. The length of fur changes drastically as well, so these two forms of the same fox may look like two different species! Other than that, the arctic fox looks very similar to the red fox, with slightly sturdier muzzle and smaller ears, often made visually smaller by the fur. The eyes are yellow or brown.

This fox looks like a smaller version of the red fox. It has big eyes, a slightly shorter muzzle, and has a kind of puppy look to its body. The eyes can be bright yellow or brown, and the pupils are round, which is unique among foxes.

This fox looks like a grown up pup, with its big eyes and ears. It has a slender, but very small body, with beautifully elongated skull. Their eyes are dark brown, though not as dark as in fennecs.

This fox got famous by its characteristic wide cheek-mane, making its face look square. It’s not the only characteristic feature of these foxes, though—to draw one, keeps its head disproportionately big. Make the eyes small, narrow, yellow in color.

How to Draw “False” Foxes Species

These were so called “true foxes,” foxes from vulpes family. But there are also other canids called foxes because of their appearance, though they’re not so closely related to any of the vulpes, or to each other. I included them in this tutorial, because they are fox-like enough to draw them using the same methods.

You can see right from the proportions of the head the difference between a gray fox and true foxes. Its muzzle is short, and the eyes are big and dark. The head seems slightly too small for the body. This is the only fox that can climb trees!

As the name implies, this animal has huge ears, comparable to fennec foxes. It has smaller eyes than fennecs, though, and the muzzle is longer. The legs are not as fluffy as the main body, so they may look very thin in comparison. The eyes are dark brown.

This fox shares some visual similarities with a weasel, so you must be very careful not to use too many vulpes features in its head. The body is slender with almost streamline head and neck. The eyes are brown, but not very dark.

How to Draw a Fox Step by Step

Enough theory! Now we’re going to draw a few foxes step by step using all the knowledge from the previous part. I want you to draw with me, but in a special way: Don’t copy the lines I draw, but instead use the tutorial to achieve the same results. This way you’ll learn how to draw a fox from imagination, not from copying someone else’s drawing.

Sketch the skeleton quickly and loosely. It doesn’t need to be detailed, but make sure the proportions are roughly correct, and that you know what kind of perspective you’re going for. If you know how to draw a simplified skeleton of a fox from imagination, but you can’t come up with any natural pose, take some time to sketch various poses from photos.

Draw the main body, dividing it into fourths to create the shoulders, the thighs, and the body in between.

Draw a line from the body until you reach the “ground.” Then draw the perspective of the ground to make it a point of reference for the body.

Draw the basic shape of the skull and attach it to the neck.

Draw the legs of each fox, finishing them with the wiry structure of the paws.

Add the volume to each part of the body. 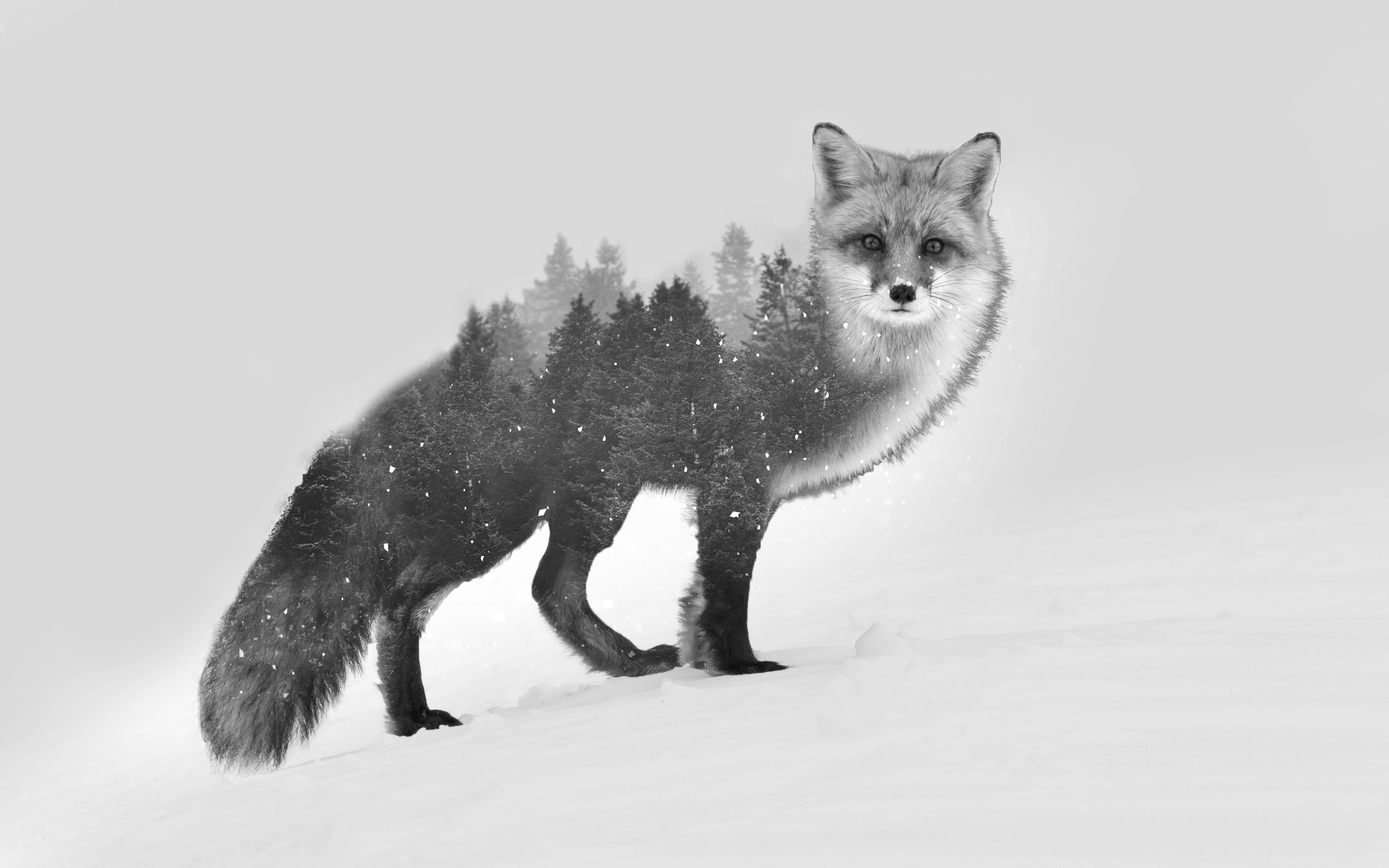 You now have enough guidelines to create the final drawing. Don’t worry if at this point your fox doesn’t resemble the species you were going for. The pattern of fur, especially the dark stripes between the eye and the whisker area, are a crucial part of the species look.

Color the drawing, if you wish, or at least darken the crucial parts of the pattern.

The tutorial is finished, but this guide is just a beginning—now it’s time for you to work on your own. Remember: The best way to learn how to draw foxes is to draw them! Your first drawings may be bad, but don’t let it stop you from practicing. Sketch a lot, actively search for mistakes and solutions for them, and you’ll see yourself getting better with every drawing. And don’t shy away from references—use them as long as necessary to understand foxes completely.